This week we had a special visit from Women’s National Basketball League and Bulleen Boomers MVP Liz Cambage.

Set to be the next biggest name on the world basketball scene behind Lauren Jackson, Liz dropped in to see her friends at Templestowe Heights Primary School before she hopped on a plane to head to America to play in the Women’s NBA (National Basketball Association).

Liz spoke to Grade 4,5 & 6 about the importance of eating right and how that relates directly to being able to get the best out of your body and mind. Liz had the children enthralled as she also spoke to the budding students about the need to be relentlessly persistent in whatever your task is, which is one of the values at Templestowe Heights Primary School.

Liz’s path to the Australian Team and WNBA is quite amazing when you consider that our tallest current day Australian female basketballer, who stands at 6’8” (203cm), only started playing basketball when she was in Grade 6, which is very unusual these days. With height and that relentlessly persistent approach Liz fast tracked her way through State Teams and the Australian Institute of Sport and ended up a Star for the local Women’s National Basketball League team the Bulleen Boomers and Australian team.

It was a terrific opportunity for the children of Templestowe Heights to talk to Big Liz and find out what she was like as a student and how she handled growing up so much taller than everybody else in her class.

Liz finished off her visit with some classic shooting and invited all Grade 4,5,& 6 students to one of the Bulleen Boomers WNBL home games later this year on her return from the WNBA season. 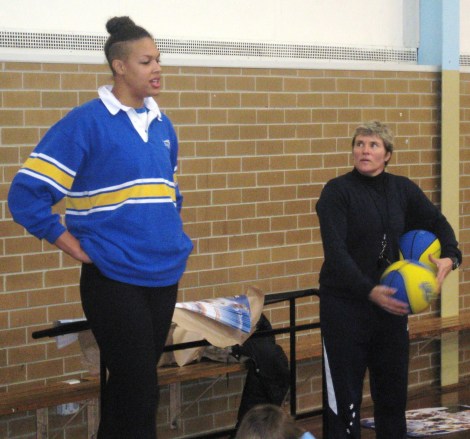