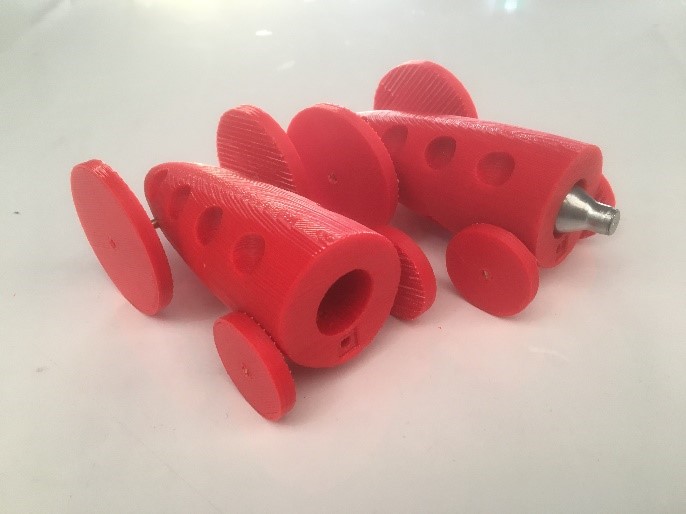 At Templestowe Heights Primary School we have introduced a range of engaging and challenging curricular activities in the STEM (Science, Technology, Engineering and Mathematics) area. This has included coding through Robotics (Foundation to Year 6) and in 2017, designing and printing 3D models. These wonderful opportunities have taken place in both home classes and in passion learning groups.

In early 2017 students in Year 5/6 were given an opportunity to take part in a competition called Print-A-Car run by Quantum Victoria. The competition sees teams (2-4 students) race 3D printed cars that they have designed themselves. A group of 4 boys, Oscar, Ashley, Bryan and Sean spent time throughout Terms 2 and 3 designing a car with some very strict guidelines.

The process sounded simple but the team quickly discovered that there was more to the competition than just designing a car in 3D, that it involved some key learning opportunities.

The students started this collaborative task by assigning roles to each team member and working on their social awareness and management. They quickly moved onto researching important engineering and physical science concepts, such as air flow and resistance, in order to decide on the best shape for their car. Once they had chosen the general shape and features they turned their attention to learning the skills involved in graphically designing a model using a computer program called XYZ Maker. This design process provided many problem solving opportunities for the team as they needed to adhere to many rules or face time penalties. The size and positioning of different parts of the car needed to meet the restrictions provided by Quantum Victoria. The students printed a number of trial cars before making small modifications for race day. The only non-3D printed part allowed was the car’s axel, but gluing was allowed.

Whilst all this was going on they were busy documenting each step, knowing that they needed to submit a portfolio of their work on race day. This involved taking photos and screenshots of their work, justifying their decisions and showing how they dealt with problems that arose.

The Qualifying race day our team competed in was held on Thursday 17 August at Quantum Victoria. Schools from as far as Echuca competed and about 70% were secondary schools (in 2018 they intend to make Secondary and Primary sections compete separately). The day consisted of three activities, racing the cars, creating a reaction timer using the coding program Scratch and taking on some robotics challenges with Lego Mindstorms.

Our team had a wonderful day and did a fantastic job with their car and portfolio. They did so well that they qualified for the finals which will be held in November at La Trobe University where they’ll get to not only compete but also see some of the projects the final year engineering students have been working on. Well done (so far) to our four students, some great STEM work!